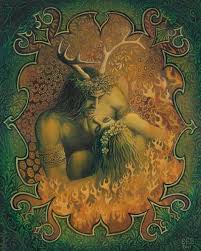 I am aware of my writings and I know I come across as a "Bigotted Pagan with Weird Beliefs".

Let me also tell you something else about me -- I do not give a flying Pi__ what you think about me.

My path is personal, and with that path comes insights, beliefs, opinions and musings and thoughts.

One day as a pagan I looked at what "Christians" did and wanted to puke. Outside of the food gathers and things, it was a shit religion to me. I have to worship some man who isn't even American, who died on a cross maybe and even though there is no proof of any of it, follow this religion blindly.

Well, I couldn't and I don't. Does that make me a bad spiritualist all together? Now, because paganism is so wide a path -- I have a set belief about gaysexuality, as I call it, bisexuality and so on, as gross and degrading. Yes, women just like men can be found attractive by the same sex securely and non. Maybe they just like the taste. But anything in love done for public attention in a media circus is one thing -- DRAMA. If Cheaters and Jerry Springer and all that bs is DRAMA then so is any public gay relationship. Anything done for attention is not going to work very long.

Tolerance is when you see the points of other people even if they don't agree with you or your points. Agree to disagree, it doesn't make that person wrong for their belief on whatever it is that requires you to be tolerant. People want their way when it comes to relationships and the more pull and force they use the more greedy and insecure and immature they are inside themselves and these people can't have any kind of relationship for very long except with their hand, if you know what I mean. lol

Ask yourself what a public gay relationship does for you:

1. Do you feel safe and protected by your lover and home life?

2. Are you secure for family and friends and even your co workers to see you out with them?

3. Do you feel nurtured or protected by them or your choices?

4. Would you feel safe with them at a non gay event or lifestyle event?

5. Do you feel like it is all about them and never any about yourself and your desires?

6. When in sex play or foreplay with your lover are they equally giving to you as you are to them and do you have a feeling of connection/completion to them during and after?

7. Is the foreplay between you two (or more) satisfying? Do you ever feel like it could be better or less rushed? Is it ever before an outing or during one? Is the idea of being out with them more satisfiying if you two (or more) are doing the kinky in the bushes somewhere or bathroom etc and so on? If they only want to make love to you at events, before, and after then the idea of being out with a man or female is making them horny -- not exactly you and its more exciting and daring. This is immaturity of sexual life. You want and need it to be on you, not an event, or you'll only do things at events.

8. Say your partner knows you have an ex gf and wants to ruin things between you and the girl so he or another female deliberately makes a move on you in front of the other party, or they make sure she overhears things she shouldn't to be bold and brazen in your sex life. This is manipulation of your sexual partner and no one should put up with the bs because they don't like sex with you, or you enough to respect what has gone on before -- they want to make sure it never happens again. Anyone who could make this happen is not a mature or secure person, and will continue to make people miserable or unhappy also including you. This is a type of mental and domestic abuse. They are using you. (and is one of the reasons why that female is not sweating this bullshat) (I call this the "Brewsky Effect") because someone tries to do this to me and my ex's all the time.

9. Say your partner is still into their other gay ex and is using you to make them aware that they have great sex with you. This is all about manipulation and attention. This is also abuse. It will never last unless you just enjoy pain. There is no way to turn sodomy into true love.

True partners understand, communicate even when angry, never lie to one another, even if you think they should, and take breaks when needed from one another. They share passion and compassion, love and take care of one another. They go out of their way to show one another they think of each other. They do small things and large things together. This is the true gift of any soul mate or spirit mate. Friendship, love and honor.